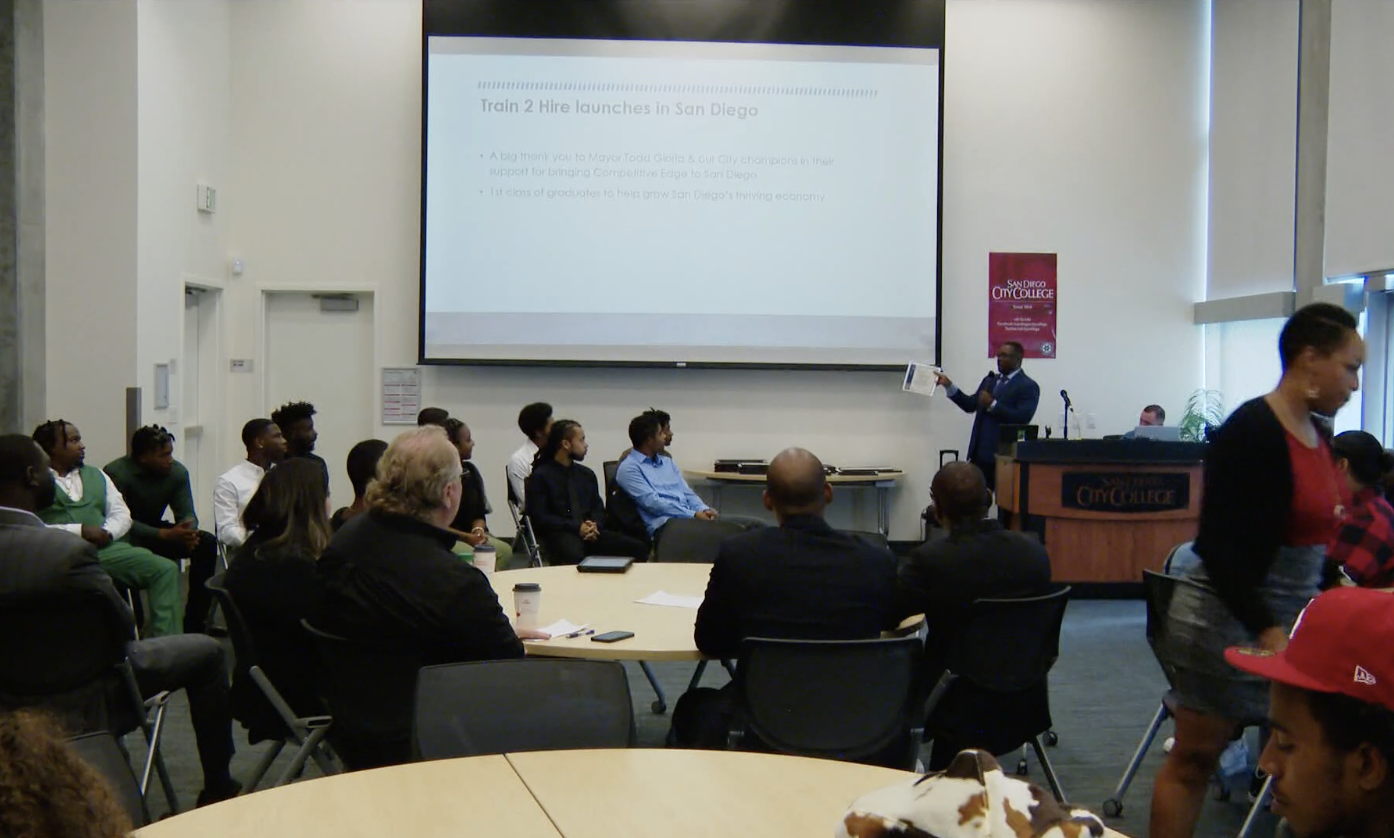 The graduating cohort from the Competitive Edge Program finished a six-week education program that they were paid to attend and will start at new jobs on Monday.

AN DIEGO — San Diego City College students graduated from the Competitive Edge Program on Friday, a program that trained them for careers in utilities construction services, while paying them.

The graduating cohort finished a six week education program that they were paid to attend and will start at new jobs on Monday.

The new jobs are entry-level positions with companies working in utilities construction services, with clear paths to advancement.

A need for diversity, local workers

The companies are in an industry in need of diversity and in need of more local workers. On many construction sites you’ll find workers who are brought in from out of state, which costs employers more than local employees.

The classes at City College go over a variety of topics including safety and leadership, but there are many lessons about building a successful career. David Tillman, who is on a path to become a project manager, said there is a clear path to success,

”So, these guys are literally giving you the blueprint right in front of your face, it was very important, and is very helpful and I think is very beneficial,” said Tillman.

The program partners with faith-based organizations to identify candidates in underserved communities who are searching for an opportunity.

While San Diego City College has many educational opportunities for people looking for careers in trades.

Vice President of Administrative Services John Parker said this program is a unique opportunity, and a program that he and the school are happy to be part of.

“Very gratifying. Again, part of our core mission and our vision as well is to provide such opportunities for underserved communities and to contribute to local economic and education development,” said Parker.

For Aljanae Beamon, she said this was an opportunity to switch tracks, from a job in healthcare where she felt had hit a plateau, to a job she sees a chance to grow in.

At the end of this program, she’ll have multiple certifications, including one for being an assistant project manager.

Isaiah Mackey was hoping for a chance to get into some type of construction and is excited to start on his path to being a lineman at only 19 years old.

David Tillman has some experience as a laborer in the field, and is building on that to become a project manager in the near future,

”It seemed like that was like a dream come true. I've never heard of something like that before. I've heard of going to school, getting a job right after that, but paying me throughout the whole process. Sweet,” said Tillman.

For Bruce Mayberry, Chairman of the Board for The San Diego Central Black Chamber of Commerce, who has worked for years in utilities, this type of program and these types of jobs are critical for building a better community.

“So if people want to live here, they have to have great paying jobs. A lot of them are union paying jobs. They're working for major companies, as we've talked about. And so this is just a win-win, win-win for everyone," said Mayberry.

Taking classes and earning a paycheck

CEO of Jingoli Power, Karl Miller, is the driving force behind this program. He has experience with similar programs in other parts of the country. Paying this cohort to take the class is a first for him, but it’s essential.

“These young men and women, they can't afford to not have income for six weeks. So we're paying them and paying for the classes, so they get a paycheck every week,” said Miller.

Jingoli Power is hiring six of the 13 members of the cohort, the other seven will be going to work for A.M. Ortega Construction.

Lonnie Edward Morris II works in safety for A.M. Ortega and has worked with this cohort in the classroom, but his lessons won’t end there. Morris’ said he has all of the students’ phone numbers and is constantly in contact with them, “After their week with me. All of them have my phone numbers and I have entertain calls and text messages from them all since then”.

The people behind the program believe they have the recipe for success, when you combine the education and ongoing support being offered. This was the first run of the Competitive Edge program here in San Diego, but the plans are for more in the future, to help satisfy the need for new skilled workers, and to find young men and women ready to grab a golden opportunity, and get a head start on a career that will provide them the chance to build a good life for them and their families.

JINGOLI Power and affiliated companies take no credit for the photography, proprietary content, or article. Article is being redistributed for educational purposes and re-sharing of content to educate industries about JINGOLI Power brand and history.